The last couple of weeks I've been buying up Christmas lights to put up in our windows. It never even occurred to me in previous years but for some reason this year it's like I'm competing in some neighbourhood festive lights competition. I've been back to the store 3 times already (fortunately they're all on sale by now) and each time I get home I play it real cool like, yeah I could put these up now, or later, doesn't much matter, but eventually I quit pretending like an idiot and just put them up. The first afternoon they were all up, I turned them on and when it got dark enough I wandered around looking at them and then burst into tears. They were not put up very symmetrically and were all different styles and colours and just reminded me of tacky Christmas lights from my not exactly happy childhood in my small town. Pathetic. The next morning half of them had fallen down because of course they did. Finally I've had to admit that the grief is of course still showing up for me at this time of year. I stupidly thought these stupid lights could stop the stupid grief train from rolling over me, as if these tracks haven't been securely laid down and relentlessly maintained these last seven years. My brain has somehow not yet learned that stopping emotions is a bad idea, however much I mentally chastise strangers on the internet for understandably trying to do the same damn thing. I haven't wanted to sift through those difficult feelings and those difficult memories of what happened seven Christmases ago, when I was hugely pregnant and we were preparing ourselves and our three-year-old for the arrival of her baby brother. No one tells you that at that point, at almost 38 weeks of pregnancy, the baby has already arrived. In your heart, in your home, in your family.

But now it's 4am, I can't sleep and I've turned on one set of the white lights in the living room. And it's...kinda nice. Peaceful.

I haven't been lighting his Christmas candle the last few years. It's just sitting on a dresser in the bedroom and I dust it every once in a while. I've been afraid of making my family sad by getting it out. And I guess myself. It's not great when you restrict yourself from expressing your love for your children in your own home. Still working on that. 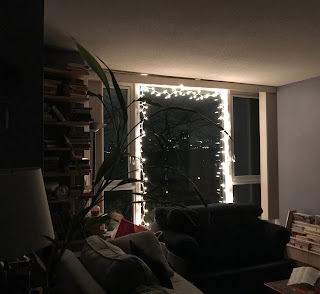