Well, there's no shortage of blog posts out there about Halloween and grief. Just google some version of that and you will see bereaved people coming out of the woodwork to express how difficult it is walking around at this time of year when the dominant culture is so entertained by body parts and blood and tombstones and death.

We were at a community centre last weekend for our daughter's roller derby practice and it took a while for me to notice that on the windows, along with the paintings of bats and spider webs, there were red handprints. I blurted out to Pete, probably too loudly, "It's like a fucking maternity ward in here." So I will write a letter asking them to consider removing them. Do I tell my story or do I simply ask them to be less gory, which is not as effective and makes me look like a fragile mom who just needs to toughen up and lighten up and shut up? I guess some people would call it playing the bereaved mother card. It's also his story and I feel protective of it, more so now than when he first died. And why should I have to get people's attention in the most shocking way, why do we so often have to scream to be heard, rather than being able to just say, hey, consider how this hurts people who have death in their families. Even in non-bereaved families, I suspect children learn to silence how disturbed they actually are by all these morbid displays and the long-term impact of that exposure and lack of support for it. This is sometimes called "resilience" but I think it's actually an enormous problem. Turning death into a big cultural joke perpetuates our collective extreme fear of and unhealthy relationship with death that has real and destructive consequences in people's lives. I know it has in mine, and it manifest itself at the worst possible moment, when I needed to see and be with and learn to love my baby. But that part does not need to go into a letter to a community centre.

I get that different people find different things "disturbing". But so many business and private residences put up decorations that I really don't think having city-owned sites be gore-free zones is going to negatively impact anyone. I'm pretty sure no one has ever been traumatized by a lack of Hallowe'en decorations.

I think I would be more ok with the whole Halloween premise if I felt that people were also doing some of the work. The grief work. The work of being human. That we were all genuinely honouring what is special about life - that it ends - before jumping straight to a supposed celebration of life. This year I'm again planning to attend All Souls Night events at the cemetery, some of it in the hall where we had his memorial service. Last year I let the rain stop me but this year I really need to get back to honouring him (regardless of weather!), of finding ways to be close to his memory again. Year six has been hard. Getting further from the time he was born has actually been harder on me, not easier. And a celebration of his life remains impossible for me. It was just so short and so brutal and I live every day with the after effects. It would be so much easier if I could just celebrate but I can't, and I can't fake it without some cost to my well-being, so. Honouring. 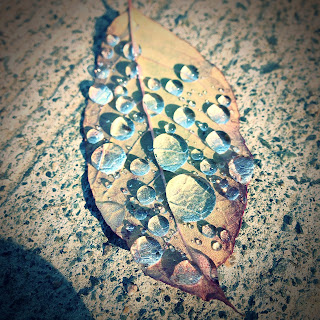