Yesterday I was clearing out old books and I found my old piano notebook where my teacher would write my homework for the following lesson. I hadn't looked at it for over 5 years. Here was the last entry: 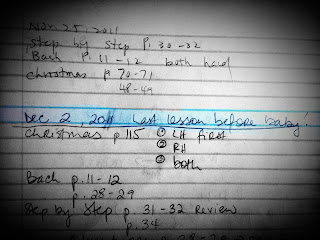 Sometimes I get incredibly sad when I get proof from the world that he is being forgotten. People say things to me that make me think (but almost never say), "Have you really forgotten I had a baby who died??" Because if they had remembered, they couldn't possibly say these thoughtless things to me.

I don't need proof that he lived. I carried him and delivered him and have his ashes. But still, when I get it, it's a wondrous thing. It's also a difficult thing. I think the biggest shock in this moment was seeing that exclamation point at the end. His death, and the circumstances of his birth, have almost completely taken over most of my memories of my pregnancy, which in addition was a difficult one. And I've been stuck with this secret, dreadful feeling that I was unhappy because of him. That maybe, deep down, I didn't actually want him. In time I've come to accept that I was in fact suffering physical effects from pregnancy which made me unhappy, and that I really was looking forward to meeting him and starting our lives with him. Here, in a notebook that only two people were ever going to see, was proof that I was excited. Written in an unguarded moment - an expression of love.