All day Friday I was aware of avoiding making his birthday "too sad" for my daughter. I can't stand when other people do that and here I was doing it too. Avoiding a hard truth because I think it's "too sad". I think one of the big reasons I was avoiding doing the usual stuff for him this year - lighting his candle, getting flowers, organizing a little trip - was because of her. There are many other complicated reasons that I don't have words for but one of the big ones was her. Rationally, I firmly believe she is entitled to her sadness and that we need to grieve him as a family as well as in our own quiet, individual ways. Putting it into practice is...harder. We did make a cake. We still have her birthday candle from when she turned 5 and I had been planning to use it but then I chickened out. The overwhelming feeling I had was fear. Fear that she would be sad. Fear that I couldn't handle seeing her sad. So yesterday when she was getting ready to go to a birthday party and making a card, I found some courage, dusted it off, and during a quiet moment I said to her "Today probably would have been his birthday party. Or tomorrow." She didn't say anything. I started to wonder if she had even heard me. After a few minutes she skipped off and got a card I had made when he was born, with his name, birth date, and an Emily Dickinson poem, and she copied part of the poem into the birthday card she was making for her friend. And she did this all in her energetic, happy little way. She even seemed to be feeling a bit proud of herself. I thought that was all so interesting. When I overcame my fear and allowed her to share our family's reality, she found a way to integrate it. It doesn't mean she's not sad about him. It just shows what grievers everywhere know - that grief is as individual as love.

Five has been hard. Harder than I was expecting. Expectations and grief are sworn enemies, I keep forgetting to avoid trying to unite them. Even though I'm still so angry, that he died and that the world seems to want to be ok with babies dying at birth, there is still a small feathery hope perched in my soul, which surprises me because honestly, I can't say any of this has gotten any easier. I don't know what it's hoping for but I guess it's enough for now to know that it's there. 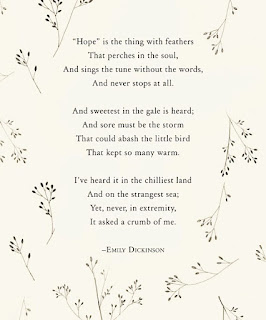