A few weeks ago, we adopted a dog. We had talked vaguely about getting a dog for a long time but I couldn't picture adding the inconvenience and mess of a dog to our lives. Then recently something changed in me and I thought, well, maybe. Maybe it won't be so messy and inconvenient. Or maybe that stuff just doesn't really matter when compared to adding some love to our lives and helping an animal in need. We started looking and within a few days, we found Livvy. 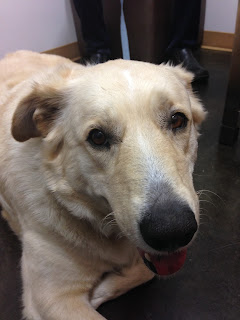 Sometimes it feels like she found us. She's a wonderful dog, very relaxed and mellow most of the time. She has a bit of a protective instinct and will sometimes bark at perceived threats but she seems to be learning that we don't need protecting. We have some general information about her history. She's a 5 year old lab retriever/Hungarian kuvasz mix and she's much bigger than the "medium sized" dog we were originally looking for! Her previous owners were an older couple and sadly the husband died and I guess the wife couldn't take care of her anymore. I'm sure she was very much loved and that her loss was added to the loss the family was already going through. The new name we gave her is similar to her previous name because I wanted to honour that past connection. She is a little overweight and needs to lose 10 kg but other than that the vet has given her a clean bill of health.

When we first found out our application had been approved by the SPCA, I was ecstatic. There had been some doubt we would get this dog, another family had applied, so when our doubts were suddenly erased, it was thrilling. Then we brought her home and an emotional crash came. I was filled with remorse and guilt. These feelings were completely unexpected. A dog, the right dog, should add happiness to your life, so why was I feeling a terrible sense of fear and loss?

It was my idea to pursue getting a dog and so for the first week I asked myself, Why did I do this? Why did we add this vulnerable creature to our already complicated lives? What if something happens to her and we are plunged into more sadness? It will be awful and it will be all my fault.

Change is more difficult for me since my son died. Particularly if I know something would not have happened if he had lived. If he had lived, would we have gotten a dog? Probably not. Who knows. With change, I have difficulty accepting it right away because I feel it's wrong, it shouldn't be happening, he should just be here. I continue to live in two timelines - the one where he lives, and this one.

After the first week, these feelings of regret eased, then passed. Now I can't imagine our lives without Livvy. Every day more of her personality is revealed to us. She's starting to lose some weight (she needs to lose it slowly) and we can see more of her playfulness coming out. 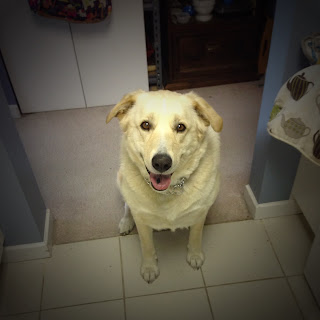 Our daughter loves her and is learning about dog care. She has always been a respectful and compassionate child, so she and Livvy are perfect for each other. This is not a surrogate sibling for her. A dog is not a replacement for anything. No person or animal can ever replace someone who is missing. It is an addition, happiness alongside sadness. 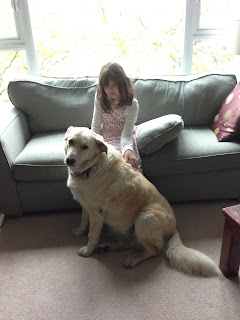 I'm grateful to the Vancouver SPCA for all their help. They obviously care very much about the animals in their care and want to find the best match between families and pets. We went back the other day to return a collar they had loaned us and to donate some dog food. They recognized Livvy right away despite the number of animals that must pass through their doors and their hearts every week. It was a chance to say thanks and to show them how well Livvy is doing.

It's not easy taking a risk for happiness when you've already lost so much, but right now I can say, we couldn't be happier. 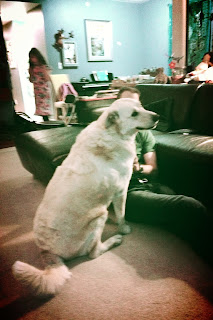