Before Toren, there was another baby. Our daughter was around 2 at the time. I was 12 weeks pregnant and I went for the nuchal translucency ultrasound to find out if there were any problems with the baby. I was given the all clear, baby looked good, no concerns detected. We weren't able to see our OB for another 5 weeks, our first appointment for that pregnancy. When we finally went in at 17 weeks, we discovered that there was no heartbeat.

I was sent to the hospital for an ultrasound to confirm. In the ultrasound waiting room, a young man was going around talking to each of the pregnant women there. He got to me and said that he was a student and was doing some kind of research and would I consent to be a subject. I said, "I'm actually here because there might be a problem with this baby so I don't know if I would make a good subject for your study." He said, "Oh, ok. Thank you." I guess it's hard to offer condolences when you are young and no one has taught you such things, and you are dealing with "pregnant women", not babies.

The scan confirmed that the baby had died. I phoned Peter at home but partway through the call I began sobbing and couldn't really talk.

Because our OB was away, we saw a doctor who was filling in. He asked me to meet him on the maternity ward after my scan. He said, "For some reason, your body is hanging on to this pregnancy." When we first met him, he said we would listen to "the baby's" heartbeat. Before the bad news, there was a baby; now, there was just a pregnancy.

I could see that he was struggling to figure out the system to help us. Finally, after much phoning around, he arranged for me to come back in the morning, through the ER, to get on the surgical waitlist for a D&C. We arrived at 9am and I was taken to the area at the back of the ER, where patients wait to be transported up to the various wards. Sitting there with the other patients, I could clearly see the screen with all our names and the reasons we were there. Beside my name it said, "Products of conception."

I was brought up to a ward, not the maternity ward of course, but a ward where you are just another appendix to them. There is no talk of footprints, memory-making, or grief. They barely do that on the maternity ward, let alone the other wards. I spent most of the day alone because Peter had to look after our daughter. The surgeon came to see me in the afternoon to explain the procedure. She had a resident with her, a silent soldier keeping watch. After she explained everything, she said, "What I'm wondering now is how you're doing emotionally?" I said, "I'm fine." Brief. To the point. A lie. But I didn't really know that then. She obviously believed me, or wanted to believe me, and said ok and left. I still wonder what her plan was for that question if my answer had been different.

They came for me at 10pm. Everyone in the OR was kind and answered all my questions. I had never had anaesthetic before so I was nervous about that. The anaesthetist came to talk to me and set my mind at ease. Peter eventually found someone to look after our daughter and was there to meet me after my surgery. I was told the surgery would take 10 minutes but as soon as I awoke I looked at the clock and knew it had taken half an hour. There was more bleeding than they had expected and I had to spend the night.

I don't know if I slept. A woman was admitted to the other bed in my room in the middle of the night. I heard her talking in whispers to her husband. She was worried about whether he would be able to come to her as soon as she was out of surgery. I said through the curtain, "Excuse me, there's a room right beside the recovery room where family can wait. They got my husband right away when I was wheeled into recovery." She said, through her curtain, "Oh ok great, thank you. Thank you." I didn't know why she was there and we never saw each other.

In the morning, the nurse came and removed my IV. He said I was discharged but I could wait for breakfast if I wanted. I waited for a little while but no breakfast came. I got dressed and left the ward. I didn't want to wait for the elevators so I walked down, I think 10 flights of stairs, or maybe it was a hundred, and walked home.

A few days later I bumped into an acquaintance on the street. She said, "Oh you're really starting to look pregnant now!" I quickly told her what had happened. "Oh no, I'm so sorry." Then without taking a breath, "You will try again."

At my follow-up GP appointment, my doctor talked about the tissue samples that had been sent for analyzing. (Not autopsy results.) I found out the baby had Trisomy 13, a genetic abnormality. The 12-week scan hadn't picked it up. Some children survive this condition but most do not. As my doctor was skimming the report, she was mumbling along and I heard, "female".

I realize now that I didn't start grieving the loss of this little girl until Toren was born. She was due one year, and one day, before Toren's due date. She was due January 22nd, 2011 and he was due January 23rd, 2012. She has the same birth stones as her siblings. The month she died, August, the birth month of her big sister, and the month she was due, January, the birth month of her baby brother. She would have just turned 3 this past January. And without her, we would not have had him.

I was thinking about that game kids play at birthday parties. They have a blindfold put on them and they get spun around and around around. Then they have to find a pinata full of candy, or a donkey to pin a tail on. I think about my time in hospital with her and I think, that was my discharge plan. "Put blindfold on patient. Spin patient around and around and around. Point patient in the general direction of the exit."

By the time Toren was born, I was still blindfolded and spinning. 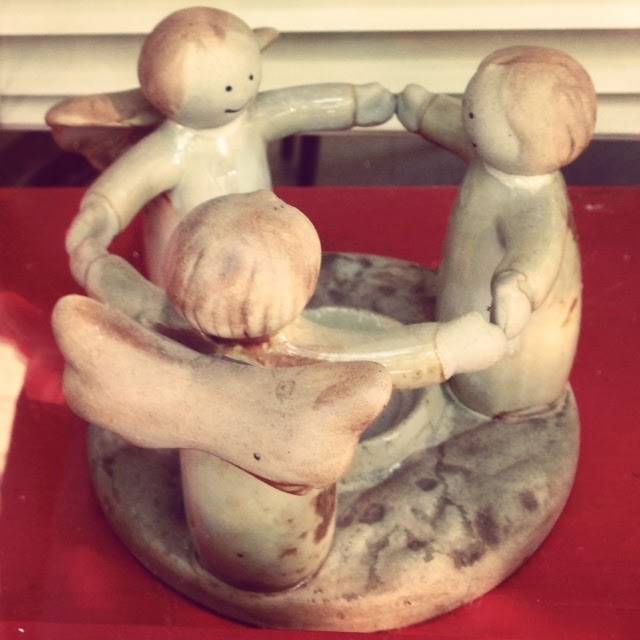