I've been feeling like I want to clear out some of our baby things. Stroller, crib, playpen, tricycle. Sometimes I get confused about whether or not they are his things. He didn't get to use them. We didn't buy them for him, they belonged to his big sister. He would have used them, but he was doomed from the beginning because of the wretched umbilical cord.

Are they his things or not??

We ended up donating the stroller this weekend. First we tried to recycle it. No one would take it because it's made up of too many different materials. Then we looked up the dump. Too far away and it costs you $10 whether you bring a load or a single item. So we brought it to a local shelter. Big pat on the back for us. Helping others in need. For some reason, I am just too angry about it to feel any kind of Good about donating this time. If he didn't get to use it, why should anyone else? I resent that. That's why I wanted to just throw it out. We have donated so much in his name. We know so many bereaved families who donate. They donate money, time, their baby's things, they raise money, they buy new things for shelters, schools, daycares, charitable organizations. It's a beautiful thing. And some days, like today, I hate it. Hate it so much.

There is so much clutter to sort through when your baby dies.

Last night I had a couple of nightmares after a day spent with another babyloss mom talking about our babies. It's not the talking that causes problems (talking actually helps), it's the unnecessary memories that clutter my brain, my life, my day, my conversations. I went to bed pretty tired but just before I dozed off, a memory suddenly popped into my head. Peter and I are leaving the maternity ward empty handed. We don't even have the car seat with us. I am hobbling because I had just delivered him 5 hours earlier. The nurses are huddled together in the nursing station and, now I think, avoiding us. This is how I remember it anyway. As I'm picturing this scene, I think about what I haven't yet thought about - he is lying somewhere. I don't know if they've taken him off the ward at this point, either to the morgue or to where they do autopsies (is that the same place??) But he is there, somewhere, most likely on his own, and his parents have not even held him or spent any time with him. They are not caring for him. They are not making sure he is ok. They are not doing their job. They are just walking away. We just walked away and left him.

Because we didn't take care of him in death ourselves, I will always be left wondering if he was well cared for every step of the way. I did try to follow-up, to ask my questions, but I had to give up because I just don't have the energy to keep pushing for a response. I met a woman, a bereaved mother, who contacted the hospital (coincidentally, our hospital) 25 times to get the answers she wanted, needed, about her baby. Twenty-five times. For her it was worth it, she said it went better than she and the nurses could ever have expected. That has given her some measure of peace. But I am left wondering.

If staff aren't trained in stillbirth, then it's reasonable to assume they are not trained in respectful handling of bodies. We met a family who did dress their baby in hospital, but when they went to the funeral home to see her, she was naked under her blanket. Someone at their hospital, or somewhere along the way, stripped baby of her clothes. Shocking and disturbing. When I hear stories like these, I think about the colossal change in Thinking and Doing that needs to happen. And it needs to happen urgently.

I'm guessing no one really expects to be handling a dead body on a maternity ward, especially in hospitals where there is no stillbirth training. I remember our nurses being kind and gentle people and that's the only thing that gives me some hope, that helps me picture that his final journey from us to the funeral home where we picked up his ashes, was peaceful. If I had to do it again, we would not leave him. He would stay with us and we would transport him ourselves to where he needed to go.

I know rationally that we are in this situation because of circumstances beyond our control, beyond any individual person's control, but it does not make you feel like someone is just about to hand you a Mother of the Year award.

There is just so much clutter to sort through when your baby dies. 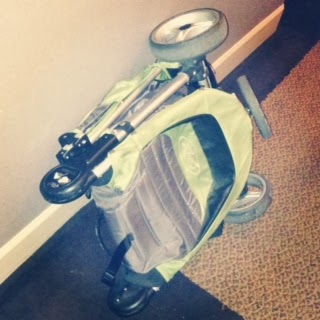