Because of my regret at not seeing or holding Toren after he was born - a story I have yet to tell on here - I have become very interested in this topic. During the Still Life Canada conference, Dr Joanne Cacciatore spoke a bit about her experiences bringing parents and babies back together after the cruel shock of stillbirth severs that attachment. It was fascinating to hear snippets of how she performs this incredibly important service. I also had the chance to ask her my own questions about it as I work my way towards being at peace with how it all went down the day he was born. I'm angry that I have to work at this at all, but I accept the anger as a tool on the journey, a tool which I am hopeful I will one day feel able to put down for longer and longer periods of time.

One thing I have been struggling with is discovering that someone at our hospital may be using our family's story as an example of parents who "did not want to hold their baby". This is beyond infuriating. I am considering writing a letter to the hospital to tell our family's story, to plant the seed that just because parents didn't hold their baby, it doesn't mean it was a "choice". Hopefully this would stop people from using our family as some kind of success story when in fact our experience is an example of dismal systemic failure. It makes a mockery of my intense regret and doesn't do anybody any favours, not bereaved patients, not the people who care for them.

The conference was not a training session. It was about exchanging information and collecting stories.I personally know one family that Dr Jo has helped reconnect with their baby and have been privileged to hear from them how it all happened. It's a beautiful story and brings me to tears, even now. Sad, you better believe it, and also beautiful.

At the conference, it was so good to hear other parents' narratives of the time they spent with their babies. I always enjoy hearing that part of the story despite my own story being cut off so harshly. I always secretly think "Whew! They did it." They were able to have that time with their baby. They were able to actively parent their child - yes in the worst possible way, but better than not at all. That time together is never enough and it in no way replaces bringing your living baby home and raising them into adulthood. But at least they have not been lumbered with unnecessary regret on that particular score. There is plenty to regret when you're grieving a child. There's no shortage of material there. Feeling like you abandoned your child doesn't have to be one of them. At least, that is what my feelings have been. I don't want to "remember him as he probably was". I want to have seen him, to have held him, to have been the best mother I could have been under the circumstances. It just doesn't make you feel like the world's most amazing parent, even when you know rationally that it was from a combination of shock and a lack of support.

I have been privileged to hear parents (and more rarely, family members) describe what it was like to see their baby for the first time, how shocked and frightened they were at first, and then a natural progression towards being in awe of their child, feeling the intense love, seeing his or her beauty, maybe even being able to pick out features from either parent, the same nose, that wonky big toe, the long fingers, the shape of the mouth. Because I didn't see or hold Toren, I feel that I am somewhat stuck in the shocked and frightened stage when it comes to my memories of him.

We are holding him now, every day, and we always will. We don't have to "keep his memory alive", it just is alive. It's not even an effort. The grief is an effort, but not his place in our lives. He's as much a part of me, of my life, of my every day, as my living daughter. When she's not with me, when she's at school or out with her daddy, she's as ever-present as if she were in my arms. It's no different with him. I know that sounds nutty, but there it is.

We talk about the silence. There's a wonderful video, made by GAPPS, called Born In Silence. It has had over 100 000 hits since it was made, and deservedly so. In 5 minutes, it captures so much of the reality of having a stillborn baby, both the immediate aftermath and the long-term impact on the family of that child's life. Toren was born in silence. He didn't cry. But he was also born into silence - the almost complete silence of the room. Every baby born, whether alive or dead, is a sweet precious baby. It would have been nice to hear that, instead of just the sound of my own crying.

To be clear, I do not blame any individual. The system is whacked out for everybody involved. That's the short version. But the truth is that health providers do have the ability to set newly bereaved families gently on their grief path, or shove them face first into the dirt.

If you know someone who regrets not holding their baby, please share this and let them know they're not alone.

If you are interested in this topic, this short, easy-to-read document is a good place to start - Caring for Families Experiencing Stillbirth: A unified position statement on contact with the baby. An international collaboration. 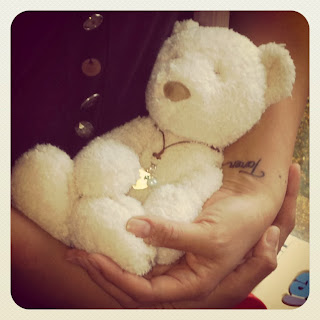