It's been a challenging few weeks with Toren's sister starting kindergarten. It seems like nothing we do now is straightforward, but this is a whole new level of so-not-straightforward-ness. I feel like I've already become a "problem parent". Last week at our school interview, the teacher asked our daughter if she has any siblings. It was very hard for us to watch her go silent and shake her head, no. That is her choice and that's fine. But as her parents, we had to find a way to introduce Toren and help the teacher understand what that means for our family and for starting kindergarten. Teachers do not get grief training. Hardly anybody does. And from what I can tell, children's grief is either minimized or dismissed altogether. We are our daughter's main guides along the grief path, however imperfect that may seem to us, but we can't be at kindergarten with her. We need more people on our team for this, and our only choice in this scenario is to educate the teacher. Sometimes, education means advocacy. I hate it. It's so uncomfortable (that's the mild word for it). This responsibility, education and advocacy for our daughter's well-being, is something I feel we neglected when she was at daycare because I didn't fully realize how treacherous the stigma of stillbirth can be.

Yesterday while waiting to pick her up, one of the parents asked me if our daughter has any siblings. I responded, "Yes, she has a baby brother but he died." I could see he didn't understand at first, and then the shock and the discomfort started setting in. Do I like shocking people and making them uncomfortable? Definitely not. It will be a miracle if that parent ever initiates another conversation with me again. Is there any way around this? Sure - I could lie. I could say, "No she's an only child." Who cares? As long as we know, right? I could keep him private, so that I don't "bother" anyone with our family's problems. As a bonus, no one can do or say anything against him, no one can minimize the force of his life and thereby cause me and my family pain.

On the practical side, there's his sister. At home, she is a big sister. Where she feels safe, she includes him. She talks about him. She makes art for him. We go to events because of him. Half the people we know and spend time with now have at least one deceased baby in their family. It would be pretty confusing for her if we sometimes included him and sometimes didn't. And it sounds disorienting and exhausting to go back and forth between being a big sister and being an only child. How is she supposed to establish her identity in her own mind with this kind of yo-yoing?

We don't have to tell every new person we meet that our baby died, and in fact we don't. Not even close. But if someone asks directly, how can I lie? I worry about kids teasing her, telling her she's not really a big sister, she doesn't really have a baby brother (the way some bereaved parents are told they didn't really have a baby). Or worse. I picture an adult, maybe another parent, hearing her say baby brother is dead and telling her she shouldn't say things like that. If we keep him private, and teach her to keep him private, there's no risk she will be teased or hear those comments. But then there's a bigger problem  - she will learn (and live) the insidious message that he is a shameful secret.

She is not yet old enough to advocate for herself. We need the teachers, the other parents, our community, to help her with this. To help our family. I think anyone can learn  to be able to say: "Oh yes, she does have a brother, but sadly, he died."

Is this ever going to be comfortable for anyone? It's impossible to see how. The furthest I can get to is to work on the idea of getting comfortable with the discomfort. It's only been 20 months since he was born and I am nowhere near "accepting" his death. It's not any kind of goal actually. As Liz Lemon would say, it's not even a thing. I sometimes make the mistake of looking ahead to the beginning of each new school year, each new teacher, all those new parents and I just want to hide under my bed. Then I remember that I only need to face today. When I pick her up later today at school, someone might ask me about siblings. I will go through the story again. No one's going to drop dead, we will all survive the conversation. Hopefully the parents will talk to each other, they will share our story, they will "warn" each other if that's what they feel they need to do. And maybe one day, someone will share their own story with me, not necessarily of babyloss but of something difficult in their own life. Maybe I will make a new friend. Someone who doesn't see me as a problem, and doesn't add to mine. 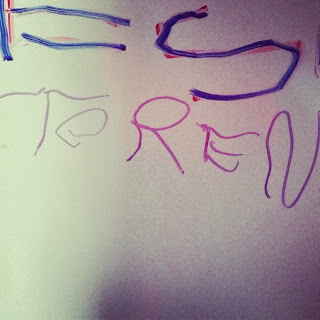