I'm not exactly sure when we started to associate hummingbirds with Toren. I know by the time I started going to support group several months after he was born, hummingbirds were part of his story, and I remember that others in group also shared different ways that hummingbirds were a part of their families' stories too. I have to admit, I don't know a ton about hummingbirds. I read somewhere that they are quite fragile in the sense that they are always on the verge of starvation because they require and expend so much energy. And they are the only bird that can fly backwards! (Someone will have to let me know if either of those things is not true.) At Still Life Canada's momentous first meeting last year, we were sitting in Scarlett's backyard and a hummingbird flew in to hover at the feeder and Amelia's mother said, "Oh yes, that's Amelia." They get hummingbirds at their place too and they live on the top floor of a highrise building. We chose the hummingbird as a symbol for SLC because we all seemed to feel a connection to these beautiful and unusual creatures. We felt the significance of how they appear still when in fact their wings are beating at top speeds. We liked the idea of there being movement, change, energy, life, despite the stillness of our babies. Similarly, when I met Marlon & Tobias' parents, I was surprised (and yet not really) to hear that hummingbirds are significant to them also. We spent a lovely afternoon on their patio recently watching the hummingbirds fly back and forth to the feeder, and in and out of our conversation, our thoughts, our day.

A few years ago, before we had Toren, Peter bought me a ring with a hummingbird designed by a First Nations artist. He said he wasn't specifically looking for a hummingbird, he just liked the ring. After Toren died, he expressed a desire to get a matching ring, not necessarily with a hummingbird, but by the same artist. We went back to the Bill Reid gallery and after spending a long time looking at all the different rings, one of the staff handed us a list with all the animals represented and what their meanings were in First Nations culture. Under hummingbird was written, "When hummingbird appears in times of sorrow, healing will soon follow." We knew in that moment which ring to get.

When I think of hummingbirds in relation to Toren, I think of Peter's family cottage in Ontario, near Kingston.  They have owned the cottage for 40 years. The hummingbirds there are very skittish. You hear them before you see them, and if you turn your head or move in any way to try to see them, they fly off. Sometimes, that's all you get. It's never enough. 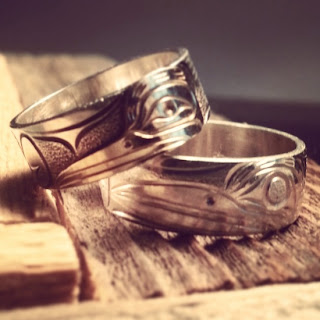