There was a story in the news recently in which a woman delivered her stillborn baby at home and after wrapping the baby in blankets, concealed the body in a plastic bag on her balcony. It's a complicated, heartbreaking story on many levels (and not the first time I have heard of such a thing happening. Another babyloss mom blogged more eloquently about a similar story here.). The mother, who was originally acquitted of concealing the baby's body, must now stand trial again. From a legal standpoint, it's a mess. It's hard for me to read about, and not just because of the legal acrobatics.

The part that I focus on is the part she and I have in common, namely, we both delivered stillborn babies. If you have never been told that you will have to deliver your child's dead body, you cannot even begin to comprehend what that experience involves. And if you have never lived another person's exact life, it is impossible to judge them on their decisions. The best we can hope for is to try to understand.

Why am I defending a mother who seemingly treated her child's body with such contempt? Because I feel like I did the same thing.

When I was in labour with my daughter, I was incredibly frightened. All was well and she arrived safely. But I'm still in awe of how unreasonably scared I was, and it was only the skill and personality of one nurse that got me through it. Three and a half years later, having not given much more thought to my daughter's birth, I found myself at the end stages of labour again, but this time being told that my baby had died. There are no words to describe the terror I felt. I've written a lot about it and still haven't come up with a single adequate word.

The next part of the story is difficult and complicated. I didn't look at him. I didn't hold him. When the nurse offered to leave him in the room with us or take him away, I had him sent away. I never asked about him again. In my mind, I completely rejected him and failed him. What happened to his body before we received it back in ashes, I will probably never really know. We have a few photos and it looks like he was well cared for when they were taken but I will always wonder. I have heard other people's stories where they thought their babies were being well looked after and it turns out they weren't. My own story makes me feel like not the world's most amazing mother. In the context of a stillbirth, the story should go that we took good care of him, that we carried out our parenting responsibilities lovingly, from the moment he was born until it was time to say our final goodbyes. It didn't happen that way. Not even close.

Compassionate people defend me and say you didn't reject him, it was his death you were rejecting, you were crazy with shock, fear, grief. I am given this message regularly and I am grateful for that, and yet, compassion towards myself is hard, hard work. But when I hear this woman's story, I truly feel compassion for her, and sometimes, some of that magical, elusive compassionate fairy dust sprinkles onto me. Maybe if she had been treated with dignity and compassion from the time she was born - and details about her story make me think she wasn't - she wouldn't be in this situation.

My daughter's labour was quick and I was told that Toren could arrive even more quickly because second babies often do. I think about the woman in the story and imagine a situation where I deliver him unexpectedly at home, on my own. I remember how deranged with fear I was at the hospital and how I rejected him. What would I have done if I had been in her situation? I don't know. Nobody knows. I can speculate because of what I know about myself and the state of my mind when I had him. I can speculate because I remember how overpowering the fear was. Because it didn't actually happen to me, this speculation has very little value and really doesn't help anyone. But there is an unavoidable feeling of "There but for the grace of God go I."

Right now there is a global movement to break the silence about stillbirth, but when I think about how people are judged for the insane things that happen to them in their lives, I understand the silence. I want to hide in the safety of that silence too sometimes. Often. I judge myself and imagine others judging me the same way. It is so hard to speak out. It is hard to tell my story. It is so hard to ask others to speak out and tell their stories. There is so much misunderstanding about stillbirth. I will keep telling my story whenever I can but sometimes I really can't, even though I know that the silence is a false comfort. 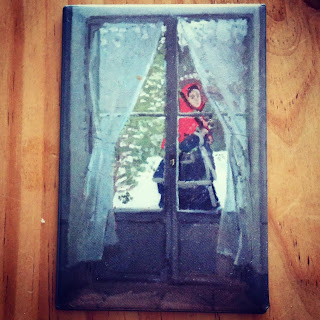