I listened to the online talk which I publicized in a previous post. I have to admit, it was difficult to listen with my grieving mother ears. The statistics were interesting but a bit too clinical for where I'm at with my grief. I do like what the speaker had to say about our need to focus on reducing Canada's stillbirth rate.

The hardest part actually came when the speaker strayed from the subject matter at hand. In particular, it was totally disheartening to hear the suggestion that healthcare professionals should take care of burial arrangements when a baby dies. This idea makes absolutely no sense to me. Sympathy was expressed for newly bereaved parents being "forced" to deal with burial arrangements while in the midst of their grief. Unfortunately, that's what parenting was for us when Toren died. We were forced to do things we didn't want to do. The biggest thing we didn't want to do was to have a child who had died. But looking back, I don't regret anything I had to do as his mother, only the things I didn't do.

The speaker mentioned that many families do want to be involved in their baby's funeral arrangements and that they should be "allowed" to do so. It's such a strange word to use - allowed. When our daughter was born, I remember being surprised at how very much she belonged to us. It should have been no different with Toren, but because we were in terrible shock, and because of the stigma around stillbirth, we were initially confused about whether we should think of him as our son. During my pregnancy, we knew he was a boy and we felt that he was very much ours. After his birth, that sense of belonging was traumatically cut off. It wasn't until months later, when  the shock had subsided and I understood the grief better, that I was able to think about what my responsibilities were as his mother. I was desperate to do right by him. Fortunately, we had his ashes, but if anyone had pushed me to let someone else take care of arrangements, I would have been easily persuaded in my traumatized state. And it would have been yet another terrible regret to pile onto an already sad list.

I don't want to detract from the excellent work being done by this research team, and the main point that Canada needs to do better for families. But it concerns me greatly that a seed may have been planted in people's minds that newly bereaved parents need to be "protected" rather than supported. It would be a misguided kindness to not give parents the opportunity to engage in active parenting as well as active grieving. I worry that anyone thinks this is the direction we should be heading in. It makes me think of the Infants Garden at Mountain View Cemetery here in Vancouver. Hospitals used to tell parents of stillborn babies to forget about those babies, move on, have another baby. Then the staff would take care of having the babies buried in common graves. Modern thinking, and the persistence of families looking for their babies, led to that area being landscaped, babies identified, and parents encouraged to memorialize their children. It is unthinkable that we would even consider going back to the old way of doing things.

It took us a year to feel able to plan Toren's funeral. It was a beautiful service and I'm so glad we did it. I'm glad that that parenting duty, and the opportunity to show our love for our son, was not taken out of our control during a time of intense stress when clear decision-making was impossible.

I highly recommend this moving documentary made by the CBC about the Infants Garden at Mountain View Cemetery: Buried So Deep. There is much to be learned from the experiences of parents whose babies died many years ago but were never forgotten. 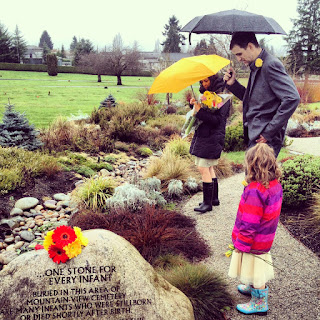