We had a nice time in Tofino when we went between Christmas and New Year. It was our first time going. I was worried about the long drive, and that winding, treacherous road, especially once it gets dark. As it turned out, another couple we know from the support network was going there that weekend so we were able to spend some time together. I thought, This is the way to go on holiday - bring your support group with you!

The main purpose of our trip was to pick up a memory box that I had ordered from an art gallery. There is an artist who collects driftwood along the coast and turns them into beautiful wooden boxes. I had been communicating with the gallery owner for months before I finally told her what the box was for and she sent me a lovely email saying it was important to her to find just the right box for us. It had been weighing heavily on me, the idea of getting a box for him. It was another one of those things where I thought, Why do we have to do these things?? This is not a normal parenting activity  Then it turns out to be right. When we got home from the trip, I put the box on the table and I remember laughing because I thought it looked like a little casket. Which is not funny.

I read my medical notes over the holidays and someone had written that they sent us home with a "memento box". This must be some definition of box I'm not familiar with, where box means plastic ziplock bag. It contained Toren's footprints and handprints, his birth card, a clip of his hair, my hospital bracelet. Grateful for those items but why would someone write that in my notes? Not ok. When we first got home from the hospital, I put his things away.  I knew I didn't want to throw them away, but I didn't want to see them either. I wanted to forget the whole thing had happened. That seems crazy to me now. But I was terrified of the grief so I tried to stop it. It took about five months for that little plan to fall apart. Eventually I took his mementoes out and started searching online for memory boxes and decided on the ones I found at an art gallery in Tofino called Reflecting Spirit Gallery. We got to meet the gallery owner when we picked it up and she gave us an angel ornament for Toren which we keep in the box. So grateful to her for her kindness to our family.

At first I thought I would just be putting his hospital items in there, but over time, I've accumulated more things. Every once in a while, some small thing will make me think of him and in it goes. Yep, if you do the math, we're going to need a bigger box one day! There is a onesie in there that says "I ♥ Mommy" which was given to him by my mom. I read a quote recently about how death cannot stop a relationship with someone you love. It transforms into something different. I have heard of parents being told their dead children are "in the past" but this is so not true (and terribly cruel to say to a parent). I had been worried the memory box would become like a museum piece that I would just dust every once in a while so it's been surprising how much use it gets. We received things from friends around the time of his first birthday, little things that they wanted to share that were inspired by Toren. And our daughter likes to deposit flower petals into it whenever she can get her graspy little hands on them. The other day she was running around wearing a fire chief hat and when she was done, she plopped it on Toren's bear which sits in his box.

"Memory" box doesn't seem like the right word anymore because it's so much in the present, in the here and now. Maybe just Toren's box. 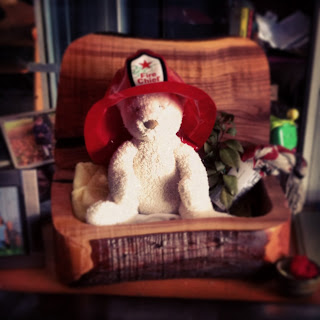