Last night I was watching an episode of Damages and it was revealed (*spoiler alert* if you are planning to watch this show) that Glenn Close's character, Patty Hewes, had had a stillborn baby 35 years before. One flashback scene showed a doctor very sensitively telling her that her baby was a girl but that she had died just before she was born. Then he asks if she has a name she would like put "on the certificate" (neatly sidestepping the birth/death certificate controversy). Skip to present day - after a traumatic experience, Patty tells her assistant she's going out of town and to tell people she's away "visiting family". She travels to a cemetery and asks a worker to point her in the right direction and says she hasn't been there for 35 years. She uncovers a grave marker which says Julia Hewes, with one date written underneath, and sobs her heart out.

A couple of reactions - first, where are they going with this particular storyline? Death, babies, grief, Hollywood?...not a comfortable combination. One thing I like is that it adds a fascinating layer to Glenn Close's character. I look at her a little differently now. Just like with real people, first impressions are deceptive, and there are stories and experiences that shape who that person is. We never know who we're talking to, until they tell us. I sympathize with her more. I'm not sure I'm supposed to because I think she's the villain of the piece! But actually I like that the characters are complex and multi-dimensional. With my newly-installed grief eyes, I see a woman who probably got no support when her baby died in 1974, which explains a bit why she is the way she is. The plots get a bit far-fetched with subterfuge and murder at every turn. Not surprising, it's a law drama after all. I do hope they continue to treat that aspect of her character with sensitivity and realism. Tall order for Hollywood. Although it's fiction, it could influence how people view stillbirth and grief. We need all the help we can get, and please, no more fiction to add to the stigma. 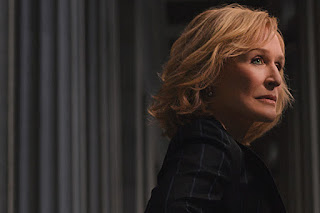