I started going to yoga again recently. I've been to four classes now after not having been for several years. Last year I was worried that it would be too emotional, that I would break down in class. Some of the parents in my support network have talked about finding a teacher to run a "grief yoga" class. So far the teachers I've had have been fine but I know that other grieving parents have experienced unfortunate comments by instructors in yoga class. How can these teachers know they have a student in class who has experienced death and birth in the same moment and that they need to be mindful of that? How can they know there is terrible wisdom in the room that they cannot possibly understand? A grief yoga teacher would need sensitivity training, and would also need to understand that if someone breaks down in class, nothing needs to be done about it. Don't interfere, don't stop them, just let them experience what they need to. And maybe don't call the last pose "corpse pose".

I've been surprised that yoga hasn't been emotional for me (so far). Often there's talk about forgiving yourself, respecting yourself, not judging yourself, listening to and trusting your body, etc. Gentle words. For me, it's often the kind and compassionate comments that can get the tears flowing. Maybe I've just had mean teachers! No, they've so far been professional for the most part and not too new-agey.

At the beginning of today's class, the instructor asked during the first pose, "If this was the only pose you did for the whole class, would you be ok with that?" I thought, yup, fine by me. It was an easy pose! If I'm honest. Then she said, "It's important to be fully present..." Yup, got that one. "...and to be happy with where ever you are at in this moment." ...umm...NO. It's important to be authentic. If your true feeling is happiness, great. Lucky you. If not, well, fine. It's maybe not great, but it is real. There have been these kinds of little moments throughout the various classes that just jump out at me.

I've noticed a couple of differences in my practice from years before. One is that I don't seem to have as much trouble relaxing as I used to. When the instructor reminds us to unclench our teeth or relax our faces, I've been surprised to discover I'm already there. I'm less fidgety too. Also I used to find the classes a little long but now we get to the end and I discover I haven't spent any time wondering how much longer 'til we're done. What does this mean? Who knows. Doesn't matter. They are just observations.

During the rest of today's class, the instructor focused on postures and breathing which I like. She was not philosophical like some of the others. But then suddenly at one point, out of nowhere, she said, "Sometimes you have to go to those dark places." I had my eyes closed and it sounded like she was crouched right beside me saying this into my ear. I quickly opened my eyes but she was across the room, back to talking about the details of posture. Did I imagine that? Who knows. Doesn't matter.

I forgot that in Vancouver, they often chant 'om' at the beginning or the end of class. Sometimes both. They didn't do this in Calgary when we lived there. I find I don't like saying the om, I'd rather just listen because it's such a compelling sound with the different voices mixing together. Very peaceful.

...I still think kickboxing classes would be a good idea. 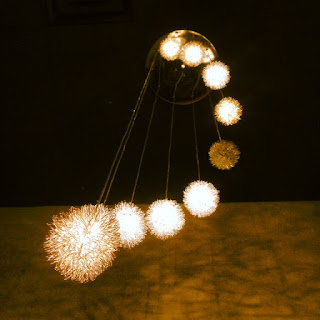