I started reading Shadow Child by Beth Powning. At the beginning she writes that their stillborn son went from one mystery to another. That's how I feel about Toren. He went from the secret world inside my body, straight to the great mystery of death.  I remember the first time I realized he wasn't physically here anymore. We had just returned from the hospital and I was trying to squeeze through a narrow space and I suddenly realized I didn't need to turn to accommodate him in my belly. He was just....gone.

His big sister is also a mystery to me. I'm in awe of her. How is it that she is here and he is not? What's her secret? What is the magic? As she grows and becomes more able to do things, wanting more to explore independence from me, it becomes more and more of a contrast with him. He remains still and quiet, forever a newborn baby. His magic is hidden.

I was chatting with a bereaved grandmother last week and we were thinking of her grand daughter who was stillborn almost two years ago. She was watching my daughter's little antics and I could see that she, too, was wondering about the magic. Little kids are so fiercely, relentlessly alive. They need everything nownownow if not sooner, and with gusto. Our daughter's magic is all around us. She shouts it, laughs it, twirls it, cries it, temper tantrums it, dances it. Where ever I go in our apartment, there is evidence of her magic. Toys (half of them dolls), stray cheerios, bits of paper (she's into cutting with scissors right now), little clothes, blueberry stains, deflated balloons in seemingly every room. I could, and sometimes do, spend many hours tidying up. He would have been the same. But his magic remains where it has always been - inside me.  Inside all of us. The only way we can experience it is in all the ways he has changed us.

There are toys (mostly cars & trucks), bits of paper and blueberry stains in every room of my mind and heart. And I have no urge to tidy them up. 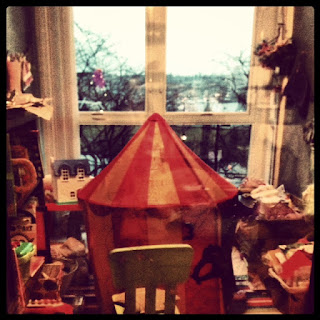