On the morning of Toren's memorial service, I received a lovely email from someone with the following wish: "I hope that today you feel close to Toren". It was perfect timing because there had been a lot of logistics to figure out and general anxiety about the day to cope with. Distractions. I also continued to have doubts that we should even be doing this. I know of another family whose baby died shortly before birth who were told that someone had asked, "Why did they have a funeral?" It's very easy for me to access that place of self-doubt in my mind. Other people's ignorance can send me there. I kept thinking, No one wants us to do this, not really. A year on, no one wants to be reminded of this poor baby who died so tragically. If people are questioning a funeral a week after a baby dies, what must they think of a year after??

To be reminded by another grieving mother that feeling close to my son is important is incredibly powerful. It shifted my thinking as soon as I read it. The reality of losing Toren is that it's the sad things that make me feel close to him. I have never thought of his memorial service as a "celebration". I don't mind other people doing it; I just can't. I think of it as his funeral and feel all the associations that go along with that. I'm sure nobody wants this for me. I'm sure people would rather I "focus on the positive". It would be nice if I could buy a bouquet of flowers every week to represent him and then I could look at something beautiful while I think of him. Nice idea. But the truth is that often it's regularly driving by the crash site or the hospital or where ever tragedy may have occurred that makes parents feel close to their children who have died. After Toren was born, I would walk by the hospital whenever I could . Whenever I had to go downtown from where we live, I would make sure to take a route that would take me past the hospital.  At first I didn't even really realize I was doing it. I still do this actually, but now it's deliberate. He didn't die there, he was only born there. But that is one place which triggers memories for me. They're not happy memories. It often triggers tears as well. But then I get that feeling. The feeling of him.

I don't know if this will change over time. Maybe someday beautiful things will give me that feeling. Honestly, I can't really picture it. But this is what works for me now so I'm going with it. Beautiful things like hummingbirds and the ocean and my daughter can make me think of him, but it's the sad things that truly give me the feeling that he is with me.

I worry about the future. I worry that, as we move forward in time, it will get harder to feel close to him. Of course I can never forget him, any more than I could forget my living daughter. When someone dies, our relationship with that person doesn't end. It continues, and we draw on our memories to help us feel close to the person. Obviously, this is difficult when the memories are so few.

Since Sunday, I have been in a bit of a daze. I feel the depression more. Our friend Jonathan who played so beautifully at the service went back to Toronto today. It's the end of the marking of the first year. Planning Toren's funeral stirred up many of the emotions from when he was first born - sadness, shock, anger, fear, mistrust, feelings of failure, uncertainty.

I'm right where I need to be. 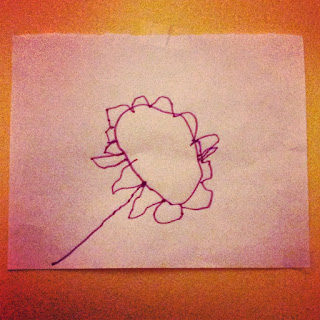