On at least one of my online support boards, this time of year is referred to as the "hellidays". As one friend said, "Anger and bitterness...sounds like the holidays are here!" That made me chuckle. The other day I had to do some shopping, and for the first time since last year, I heard the song I'll Be Home For Christmas (...♪ if only in my dreams ♫...). I have always found that song sad because it's a wartime song and I picture these poor soldiers, some of them knowing they won't make it home in time and others never making it home at all. This year when I heard the song, it felt like one of Santa's elves was head-butting me in the stomach.

Worse than the music are the cards we have received from two of our local hospitals. One of the hospitals is where both our children were born. Because we donated a certain amount of money after Toren was born, they sent us a card wishing us a season filled with "light and happiness". I know this is a key time of year for organizations to solicit donations. I get that. But...light and happiness as we approach the first anniversary of our baby's death? Light and happiness as we remember this same time last year when he was still with us and the possibility of intense joy was not just a hope but an expectation? This is our reward for asking that thousands of dollars collected in our son's name be diverted to the maternity ward to benefit other families: a painful, clueless Christmas card that seems to mock our feelings. These things are harsh to me now. I want to send it back and ask for a straight up condolence card, something that matches more what I'm feeling. I wonder if they even keep condolence cards in stock. Acknowledging grief does not seem to be something they are good at (which I blogged about here: Culture of Happy). I would even offer to pay for the postage. I could consider asking for a gentler Christmas card but even  a condolence card seems to be a tall order for them so I'll start with that. Something else arrived in the mail today from the hospital but I don't know what it is. They're crazy if they think I'm opening that one.

We bought some kind of charity raffle ticket from the other hospital so they sent us a letter from a parent whose child almost died. Of course that must have been a stressful time for that family, but to open a letter saying 'our baby is home this Christmas, please donate' did not go over well with me. Seeing the baby's happy smiling picture on a Christmas tree ornament did not help either. My baby's picture is also on a Christmas tree ornament but he is not bright eyed and smiling. He did not make it home, for the holidays or ever. We had to walk off the maternity ward and leave him behind. Thinking about that can bring me to my knees. Do they think newly bereaved parents get some kind of comfort out of reading these things? No, it's just a mass-produced card that they send to everyone on their hit list. So far it's been a total curse to get special attention from these organizations. If this is their way of thanking us, please just take our money and shut up about it!!

Peter has officially banned me from opening any more mail.

I thought we would be donating to our hospital every year on Toren's birthday. When we decided to do that in the early months, it was nice to know we would be doing something on his behalf every year. We can't organize his birthday parties but we can do this. Now all our donations will be diverted to Still Life Canada. Once the non-profit registration goes through, we can make it official. The paperwork has been submitted and we are anxiously awaiting confirmation but it could take several months. In the meantime, we are funding everything ourselves anyway (along with the two other families) so I guess our donations for Toren are already at work. I think this will be a more effective way of supporting our local hospitals in the long run.

There, can we get off the mailing lists now please? 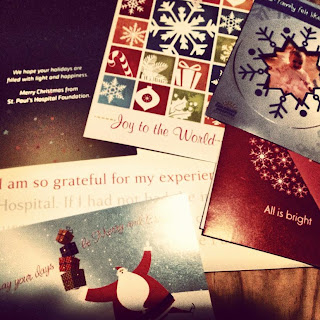