The Death of Grief

There is a fascinating (and scary) battle happening in the world of mental health. Dr Joanne Cacciatore of the MISS Foundation is leading the charge. She feels strongly about this issue because she has been working closely with bereaved parents since shortly after her own daughter was stillborn in 1994. She is a professor, researcher and therapist. I'm thinking she has a pretty good idea what she's talking about. I was lucky enough to get to meet her when we were down in Arizona for the MISS conference. She's a super-smart lovely person and has the trust of thousands of bereaved parents because she understands what they are going through and offers them her considerable knowledge and her unconditional compassion.

The short version (and, buyer beware, my version) of this story is that the American Psychiatric Association has released a new edition of their diagnostic manual (known as the DSM) which is the so-called "bible" that is used to diagnose mental illness. This new edition directs the people who use this manual - clinicians, therapists, social workers, counsellors - to diagnose bereaved parents as clinically depressed as early as two weeks after their child has died. Two weeks after Toren was stillborn, I was still in terrible shock and didn't even really realize what had happened to me. If someone had diagnosed me as depressed and put me on medications, I think I would be a lot worse off than I am now. Grief is not depression, it is not a mental illness.

I urge you to read what "Dr Jo" and her team have to say about this potentially damaging change. Grief is so terribly misunderstood in our culture. I always sort of knew it, but now I am learning first hand exactly what it means, for me personally and for our society. It's totally warped to realize that an organization like the American Psychiatric Association doesn't understand it either. Yikes.

Read the comments afterwards from grieving parents, Dr Jo, and care providers, including one of the people who worked on the new DSM. I added my own comment today:


Our son Toren was stillborn due to an umbilical cord accident in January. Grief has been very confusing and I've had to figure it out through a combination of talking to other bereaved parents, reading, finding a compassionate therapist who gets it, and thanks to organizations like the MISS Foundation. I am sad, I am angry, I am frustrated, I cry, I scream, I have moments of gratitude and compassion, I feel crazy, I think about dying, I just want to be DONE with all this grief shit. It's a mix of totally unpredictable, confusing emotions, sometimes one on top of another. I can't imagine drugs helping me figure it out. Or a clueless therapist. When our son was first born, I thought I could stop the grief. No one at the hospital was able to shed any light on it whatsoever. Now, almost a year later, I know I need to be in it. In the grief. I'm *supposed to* feel sad, angry, crazy, etc. It was harder to try to stop it. The thing that has helped me the most is connecting with other grieving parents. I am wary of medical people because they seem to not know anything about grief. I don't really need anything but understanding and if that's not possible, acknowledgement. I worry about newly bereaved parents not being properly understood. It doesn't sound like this change to the DSM is going to help with that.

The Death of Grief, the Birth of Mental Illness 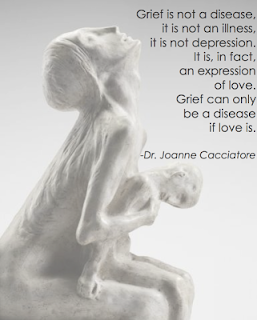