We put the tree up on Sunday. It was tough but it's done and now I like it. I have special ornaments for Toren but at first the thought of putting them on the tree was dragging me down. It caught me off-guard. Once the tree was up, I thought, Ok, time for the hummingbirds. I went into the bedroom to get them and then just sat on the bed for a while. The enormity of it all hit me, not for the first time. Last year at this time, he was here. Now he is gone.

The next day, I felt able to do it. I don't know what was different. It was just a different day I guess. I put two hummingbirds up and it feels ok. One of the mothers from our support group gave us a red sparkly hummingbird with a 'T' on a ribbon around its neck. I love it. So thoughtful. I got the other hummingbird in Arizona when we went to the MISS Conference. I have more ornaments for him which I hope to add soon. I didn't mean to have so many ornaments for him, it's just how it turned out.

I'm inching through this season and doing pretty well, I think. I guess. I don't know. It does make me angry and sad that instead of getting to enjoy Christmas with our 11 month old, I just buy him ornaments that somehow represent him. I feel indescribably sad about that. It's like instead of winning a house in Hawaii, you get a fridge magnet that says I ♥ Hawaii. It's such a stupid comparison because it's so much worse than that - it's my child. One of my children is just not here.

I'm thinking of buying a real tree, a little one just for him. I saw some at the grocery store the other day. We have all these ornaments now. I asked one of my friends if we could plant the tree at their cabin after Christmas. I want to tie one of the ornaments to the top of it so that, as the tree grows, it will rise up up up towards the sky.

Today I was thinking about whether Toren would have been furniture-walking by now. Our daughter started walking at 10½ months so maybe he would have started early too. Or not. It upsets me that I don't know and will never know. He may have only been crawling. He would probably be fascinated by the tree and be pulling at the decorations and getting into major mischief. I would probably be frazzled by it and just want him to leave the tree alone. Today, everything is still and quiet. It's a daycare day for her and I'm just here alone, looking at this tree with lights and decorations. There's no one for me to scold or distract or take care of.

I've started to receive messages from friends freaking out about Christmas cards. The perils of keeping a blog. I hate that I'm such a pain in the ass to my friends. This thing is so confusing to everyone, to me most of all, and my writing is not always up to the task. And it's the people who contact me about things like that, those who have been reading this blog (which I totally appreciate) who are the least likely to send me a hurtful card. I understand the difficulty. I now have many new friends that I would like to give a Christmas card to, but I know that they are going through one of the most difficult things possible. I have to really think about what I write to them. It's not easy. 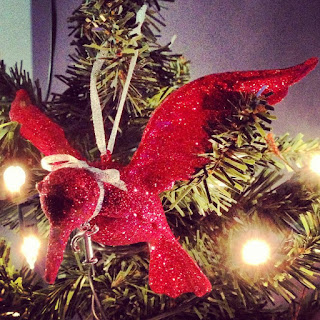 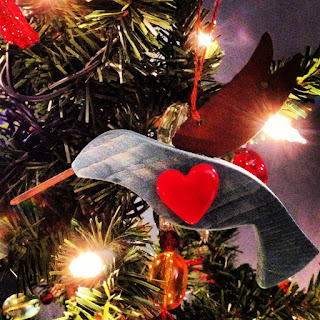 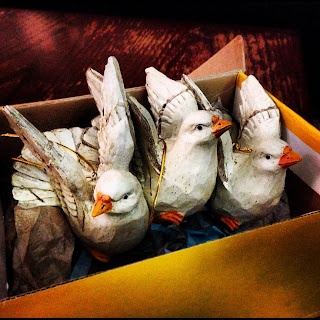 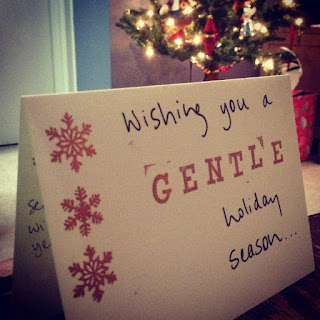