On Saturday we went out to some friends for dinner. These are new friends we made this year through our support group. It's always surprising to me how much fun this group can have together. It's just very relaxed, no one has to worry about mentioning their baby or things about the pregnancy or the stigma or the grief. At first when we started meeting socially (we call it cheating on the social worker!), as soon as we would meet, we'd start talking about all the hard stuff. Over time, I've noticed that now we tend talk about other things first - work, travel, family, pleasantries - and  then do the intense support part afterwards. It's not planned. We don't have to talk about this stuff. Except we do.

This night, our hostess had an activity planned for us - centrepieces. I've never made one before - actually, I don't think I really knew what a centrepiece was. Something pretty to put in the centre of your table I guess. It turns out it's a fun activity and a lovely idea, and a very necessary one for us this year. It holds the candle we are going to light for Toren and keep lit through Christmas day. Something pretty to put in the centre of our day. 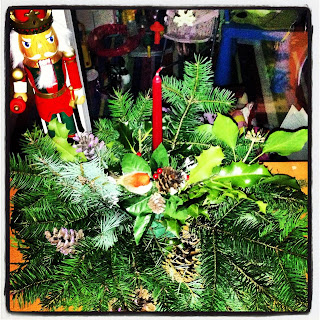 That centrepiece was actually  made by Pete. I think he's secure enough in his manhood that he doesn't mind me telling you that! I was busy keeping our daughter happy at the time. We had to bring her with us because our babysitters were not available. Just when I thought she was going to crash on the couch, she saw all the branches and ribbons and that was it, she was in like flynn. So she made her own little centrepiece too: 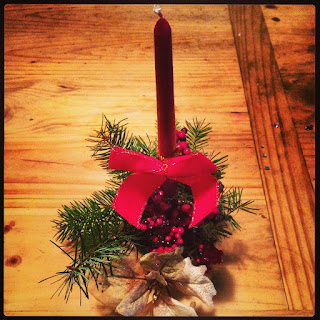 It was so nice, and such a relief, to be able to feel festive. I really didn't think I would this year. We had been to the Nutcracker earlier in the day and we had a nice time but a few times during the show, during particularly beautiful passages in Tchaikovsky's score, I would think, He will never get to hear this. He will never experience beauty. He won't experience pain and suffering either but that's little consolation, if I'm honest. Actually, he did get to hear the Nutcracker. We went last year around this time when I was at the end of my pregnancy. He was still alive then. Earlier in the grief, this would have brought me a lot of comfort but now, further along, it almost feels more bitter than sweet.

Big thank you to our hosts and the friends who were able to join in for providing a safe and fun space for us to truly enjoy part of the holiday season. It's strange to me that feeling "safe" is even part of the equation. But it's part of the sad reality. I was never a very secure person generally, and since Toren died, I feel more vulnerable than ever. Feeling secure is very much treasured.

Two blog posts I read this morning which really resonated with me:

In Which I Get Angry At The Ones Who Judge The Grieving which expresses so well some of the anger that is so present on this path.